The almost all-round protection offered by multi-sensors makes them a popular choice for specifiers and installers. Although their ability to detect multiple fire phenomena at once makes them less prone to false alarms than other devices, this advanced capability has led to confusion in the market surrounding the correct certification multi-sensors need. In this blog post I’ll explore the dangers this issue presents.

Life safety devices, such as detectors and beacons, need to be as dependable as possible. While manufacturers may state that their products meet the industry agreed standards, the small print may say otherwise and require the meeting of more complex certification. For multi-sensors, this is of particular importance.

In the face of constant technological innovation, multi-sensors have been hailed as one of the most advanced forms of life safety detection. Defined by BS 5839 as “a fire detector that monitors more than one physical and/or chemical phenomenon associated with fire”, their encompassing protection leaves little room for device failure.

Multi-sensors are most commonly used to detect heat and smoke simultaneously, with some now opting to offer a further layer of protection though carbon monoxide detection. It’s this feature that aids in their ability to further reduce the possibility of false alarms. The Building Research Establishment (BRE) and Fire Industry Association (FIA) in their study “The performance of multi-sensors in fire and false alarm tests”, were able to prove that advanced multi-sensors, such as our ACD, can outperform more basic models in resisting false alarms. As false alarms cost the taxpayer £1 billion per year, taking the time to invest in such intelligent models will provide long term benefits for facility managers through reducing labour and operational costs.

Taking the above into consideration, ensuring complete reliability is essential. However, without upholding multi-sensors to rigorous testing and high standards, any benefits of the investment could be lost. That’s why dedicated EN/BS standards are used as the benchmark for adequate performance and reliability in European life safety devices. When it comes to multi-sensors, the testing and approval process isn’t as clear cut as with more traditional detectors. There has been some confusion over which approvals are needed for the device to be classified as a true multi-sensor. Consequently, this leaves some devices with some but not all the correct approvals; something installers, specifiers and end-users need to be aware of.

Keeping up with innovation

BS 5839 Part 1 2017 defines a multi-sensor through its ability to detect multiple phenomena. Despite this clear classification, some devices are able to receive the same level of accreditation as a comprehensive multi-sensor, even though they haven’t been third party tested to operate as such. For example, sensors that are only officially certified for their ability to detect smoke but offered to operate as a sensor using smoke, heat and even CO detection. This discrepancy in product testing has caused much debate surrounding what defines a ‘true’ multi-sensor, leading to confusion over what products to trust and use.

A large contributor to this confusion is due to certification not keeping up with technological advancements. EN standards that can evaluate multi-sensors in their entirely have only been available in the past few years. Even though European Standards EN54 29 (Smoke and Heat), EN54-30 (CO and Heat) and EN54-31 (Smoke, CO, and Heat) are now available as guidelines that manufacturers can work towards, these guidelines are still not universally used, nor ratified.

To avoid testing their products to these new standards, which will most likely lead to a complete redesign of the product, manufacturers will often take the easy route and test their multi-sensors against individual criteria, such as EN54-7 which assesses a device’s ability to detect smoke alone. Without ratification to ensure a universal standard for multi-sensor testing, it’s clear these issues won’t improve.

In light of this, specifiers need to research and carefully consider the products they choose to fully understand the level of protection they guarantee.

Manufacturers have been incorporating Carbon Monoxide (CO) detection into their multi-sensor offerings for a number of years, to provide yet another layer of protection against false alarms. CO is often released from smouldering fires, particularly from soft furnishings, which can be factored into the fire decision made by the sensor to further discriminate between a real fire and a transient event.  So it’s essential that multi-sensors obtain the correct testing of the CO element to avoid false alarms. Unfortunately, it is the case, in my experience, that there are multi-sensors on the market incorporating CO detection into their programming that still do not offer any third-party accreditation in regard to the CO detection cell.

Producing a solution to these under-certified products, our new ACD sensor is the group’s newest addressable multi-sensor with CO detection. This innovation sets the benchmark for appropriate certification with 24 EN approved modes of operation in the case of the ACD-EN and 16 UL approved modes in the case of the ACD-V.  We believe it’s the most advanced and accredited triple-criteria multi-sensor brought to market to date. Designed to suit and protect a multitude of environments, the ACD has a range of modes of operation, including combinations of smoke detection, fixed temperature heat detection, rate of rise heat detection as well as CO detection; all of which meet EN standards.

In relation to CO, the new multi-sensor can also warn of the threat of CO toxicity, even in the absence of fire. When coming into contact with the gas, carbon monoxide particles will enter the bloodstream and attach to haemoglobin, causing the production of COHb (Carboxyhaemoglobin) that when exposed to for prolonged periods of time or in sudden high busts, can lead to toxic poisoning. The ACD is able to give an early warning of such incidents from happening as its algorithm monitors dangerous levels in both situations.

Another feature of the ACD is its SMART algorithm (“Suitable Moving Average Time”), a sophisticated software enhancement of its photoelectric sensors to reduce false alarms. The algorithm monitors the analogue value reading from a series of multiple samples of the environment and calculates an average value. This ‘moving average’ value is memorised by the sensor over time to determine the environment’s baseline reading from the day the sensor is installed. If no transient activity is detected within a set time period, the number of samples used to calculate the moving average is reduced, in effect adjusting the sensitivity of the sensor to its environment. If the environment remains clear for another set period, the number of samples used is reduced again.

However, any transient activity will result in the sensor automatically switching to the maximum number of samples, to quickly determine whether the transient is the start of a real fire or a false alarm, such as steam, burning food or cigarette smoke.  In this way the sensor remains as sensitive as it needs to be, based on its environment. In the event of a real fire, the SMART algorithm is over-ridden.

I believe that the purpose of all life safety devices is to offer guaranteed, failproof protection meaning specifiers through to the end client need to be assured in their choice of product. However, with such uncertainty in multi-sensor testing, these dangers will continue to grow unless such regulations are enforced.

While the ratification of multi-sensors continues to look unrealistic, the responsibility falls to the life safety industry to push for universal guidelines and a more authoritative approach. 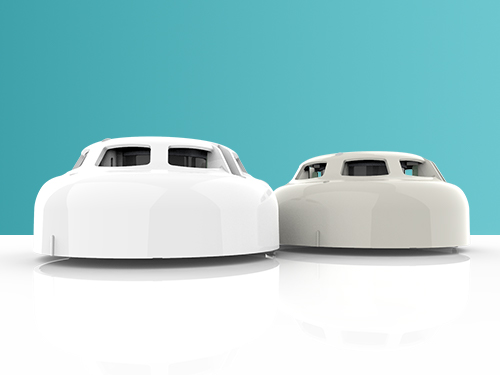