Electronic cigarettes, or ‘e-cigarettes’ as they’re more commonly known, were first introduced into the European retail market in 2006, just one year before Britain’s indoor smoking ban. Ten years’ later, an estimated two and a half million people in the UK are thought to use these devices regularly.

Under current law, smoking tobacco in an indoor workplace is a criminal offence in Britain, regardless of employer attitudes. Breaches of the 2007 smoking ban can result in a £50 – £200 fine for offending employees. However, e-cigarettes are exempt from smoke-free legislation as no substances are burnt during the inhalation process.

A key consideration for building managers where vaping is permitted has to be life safety. Specifically, whether e-cigarette vapours can cause increased fire detection false alarms and what they can do to tackle the risk.

Over the last two decades, despite the annual number of false fire alarms in the UK having decreased by more than 42 per cent, the problem is still prevalent. These occurrences account for over half of all emergency call-outs and it is estimated they cost the British taxpayer around one billion pounds in wasted time and resources every year. False alarms can also put safety at risk by causing unnecessary panic which can lead to injuries. With these issues in mind, it’s no surprise that reducing false alarms is one of the biggest fire safety issues being confronted by facilities managers currently.

So, can vaping affect fire safety devices in a way that causes them to fault? Vaping, as its name would suggest, results in the release of water vapour into the immediate area. Although there have been few reports of e-cigarettes causing operational issues with smoke detectors, technically, it is possible, especially with less advanced products.

To understand how e-cigarette vapour will affect different smoke detectors, there needs to be a better understanding of the particle size and distribution of the aerosols produced. The Department of Chemistry at Monmouth University measured the particle size of e-cigarette vapour in an undiluted state using a spectral transmission procedure. The study found that the particles are typically between 0.25 – 0.45 microns, which is actually comparable to tobacco smoke.

In addition, e-cigarette particles that reach a smoke detector will actually be diluted, having mixed with saliva in the mouth, creating particle sizes more comparable to steam. It must therefore be expected for e-cigarettes to affect smoke detectors in the same way as steam does. This means that if someone is standing directly under a detector and creating a generous amount of e-cigarette vapour, then the density of particles entering the chamber may cause smoke detectors to alarm.

By choosing the most advanced and reliable smoke detectors on the market today, facilities managers can reduce the risk of false alarms from both steam and e-cigarette smoke. For example, there are detectors which contain a honeycomb structured mesh, specifically designed to maximise smoke flow and improve tolerance against insects, dust and steam. If steam comes into contact with the mesh, it is forced to diffuse through it, resulting in the dissipation of vapour particles and reducing the risk of a false alarm. Devices which make use of smaller apertures (around 0.4mm) with a wider aperture ratio have improved smoke flow which also helps boost tolerance against dust and steam.

Smoke detectors use optical technology, so if smoke enters the chamber an infrared light source will be scattered by the smoke particles and the device will alarm. To protect against false alarms from vapour, high-end products use an optimum scattering angle between the infrared LED and the photo diode which reduces sensitivity in the case of steam-like vapour.

Although it is unlikely that a smoke alarm can be triggered by e-cigarette vapour, facilities managers and building owners should take the necessary precautions if vaping is allowed in their premises. By investing in high-end and robust life safety systems, specifically designed to be more tolerant to vapour and steam, the likelihood of false alarms occurring can be significantly reduced. 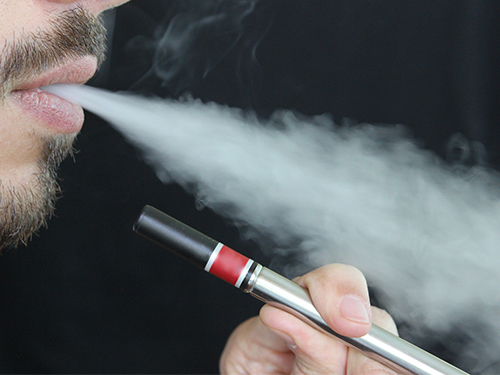